What is feature engineering?

Feature engineering is manual creation of features (predictors). In the case of Titanic competition

Why I need feature engineering

In this entry I will explain some improvement of my recommender system. My training data looks as follows.

Each row corresponds a text and each text is converted into a vector through TFIDF, a variant of honest word counting. The variables term1, ... , term1000 gives the value of TFIDF corresponding to a (stemmed) word. label is the target variable taking ±1. (cf. Recommender System without CF)

When creating a predictive model on this server, I have two problems to solve.

The second problem does not allow me to deal with the original training data with too many predictors. Therefore I have to reduce the number of predictors so that the computation will be executed without any problem.

An easy way to reduce the number of predictors is PCA. I implemented SDV for PCA (without any library for numerical computation), but the computation is very slow. For a certain large matrix, it takes longer than one hour to get SVD. This is obviously not practice.

For this reason I try the following ideas

The first idea is very good to reduce the number of predictors without loss of information. The rest ideas are not so bad and I found a better solution to this problem, so I'd like to describe the idea.

How to choose good predictors

In this entry feature engineering means just a selection of predictors. One of the difficulties of my recommender system is that predictors are different each time. So I need to a criterion for selecting predictors.

The following table shows that the CV score (average of accuracy scores on validation sets).

Each column corresponds a statistical learning algorithm. "base" is the majority vote, a training set likely consists of more than 50% of +1. So the model says that the label of every text is +1. "RF" is the random forest and "KNN" is K-Nearest Neighbourhood. "wPLR" is a (penalised) logistic regression with (tuned) class_weights. "PLR" is the penalised logistic regression with a tuned probability threshold (and weight 1). "cos" is a so-called cosine-similarity predictor.

The basic idea of dropping features with "low frequency" is to avoid overfitting. Since the feature matrix is sparse, a feature taking only 0 except one observation could cause overfitting. This idea works more or less.

There is no reasonable reason for choosing only 50 features except guarantee of the execution on the server. 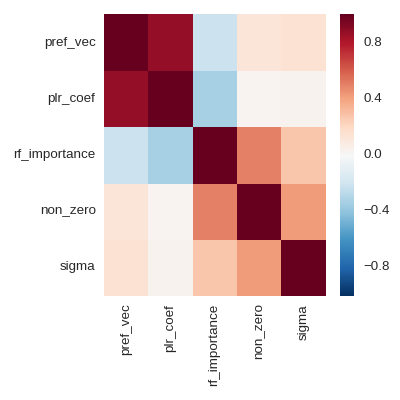 In the above heat map, "non_zero" is just a count of non-zero values in each column, and "sigma" is the standard deviation. I do not think that it is a good idea to look at variable importance in the random forest, because the feature matrix is sparse. A random shuffle of a column has no large effect.

Remark: The scores which I gave above will obviously change if I give a new label.